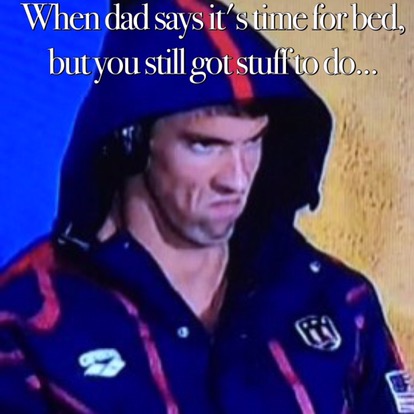 So recently I’ve been pretty excited about how great Jackson has been about going down for bed. There was a time where it was a bit of a flight to say the least. There was kicking and screaming and yelling… there was a lot of crying… And that was just Stephanie and I and I. Jax has never really given us major problems going to bed but he was never totally excited when it was time for night nights.

But I think that’s a good thing. Two year olds aren’t supposed to want to go to sleep. Two-year-olds are supposed to fight tooth and nail to stay up to run around and play until they literally pass out where they’re standing. I want my son to hide underneath the dining room table and and think that I can’t see him when he’s standing behind the living room couch trying to be invisible when it’s time for bed. I want him to think that if he hides long enough then it becomes “out of sight out of mind,” and I’ll forget he’s there and then he can stay up all night.

I just don’t get why parents think their child should willingly March themselves to their bedroom get changed brush their teeth and quietly lay down. If there ever comes a day where Jax looks us in the eyes and says, “mother… father… I do believe it is time for me turn in for the night.” Or he willingly tucks himself in without at least a sigh or complaint of some sort then I’m taking him to the doctor to have a battery of tests done.

He’s two… He’s supposed to want to stay up and wreak havoc. I did it when I was two… It’s only right he does as well.