Let me start by saying I absolutely LOVE my boys! 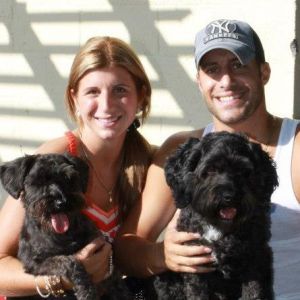 I guess I’m not a dog person.  I am not sure what that even means… I know there is some connotation that comes with that statement, and again I’m not sure what that even is.  I love my dogs, but after today I just can’t count myself as one of the “dog people.”  Steph and I have had Buster for almost nine years and Max for seven and we still love them more than we ever thought possible.  But the thing is, we now have a son… a human, someone who can’t sleep in a crate, someone who you can’t put a shock collar on to keep him in the yard.  You know a real living baby who is a person not a dog (not that our boys dogs ever used a crate!).

I remember before Jax came everyone used to say we would stop posting pictures on instagram and buying the boys (Buster and Max) Xmas gifts when we had our first child.  I remember people saying how annoying it was to see all these posts about “pets”, but you know what… too bad… these two little guys are part of our lives, they have been with us since the beginning and nothing will change that!

But here’s the thing… there is a difference, a REAL DIFFERENCE, between “dog people” and people who love their dogs.  I figured this out today, at the dog park of all places.  Steph and I try, not as much with Jax here now, but we try to get the boys as much excersize as possible, the dog park, doggie day care… even a simple walk around the block.  However, there always something that made me feel a bit out of sort.  When ever we went to the dog park, there was some sort of middle school lunch wave thing going on. Like if you don’t wear dog sweaters and carry a fanny pack filled with treats and poo bags then you don’t belong here.  I always noticed it, but never felt it until today.

We took an hour to pack the car like we were going on vacation for three weeks, and headed out the door for a nice family trip to the neighborhood (next town over) doggie park.  We got there and immediately were shunned by the locals.  Looks of disdain and disgust at the fact that we showed up without our dogs on a harness or the fact that we were wearing jeans and not stained, purple sweat pants.  Within two minutes Stephanie was being read the Dog Park Riot Act for something (we still have no idea what, maybe because she wasn’t wearing camouflage?!).  Every time dogs began playing with Buster and Max owners were quick to intervene.  I think I heard someone say, “ewww those two dogs pooped and their owners threw their poo in the garbage instead of holding in a fanny pack.”  Just pure weirdness.

So I guess there are “dog people”… the people who bring their dogs to the dog park and eat the same treats as their dogs do… and then their are people who love their dogs, like us.  Who are not made for the dog parks… we are more of the dress your dogs in an argyle sweater and take them for a walk at the doggie friendly outdoor shopping malls.

Love these two little monsters… and I am really glad that Jax is forming a bond with both of them! 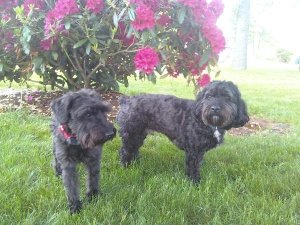 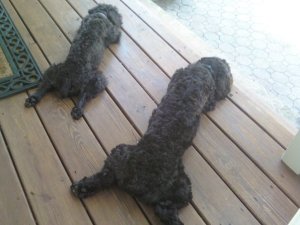 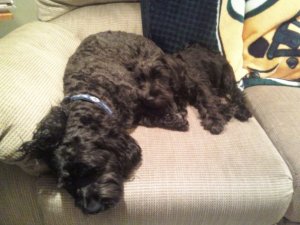 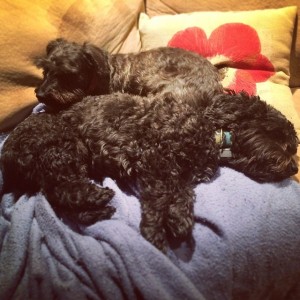 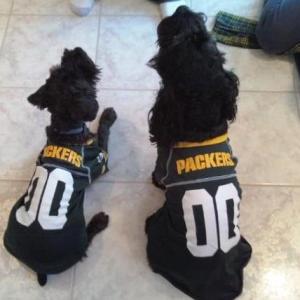 These two even hang out in the same places! 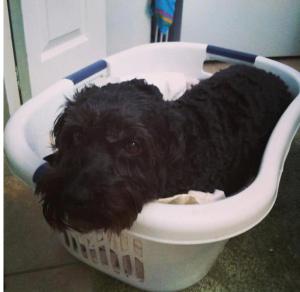 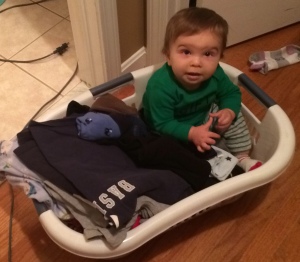 And one of my favorites… the boys watching over their brother while he naps! 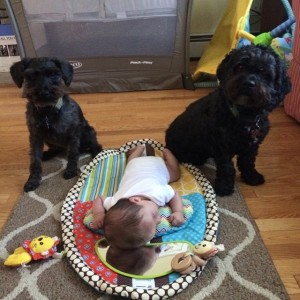