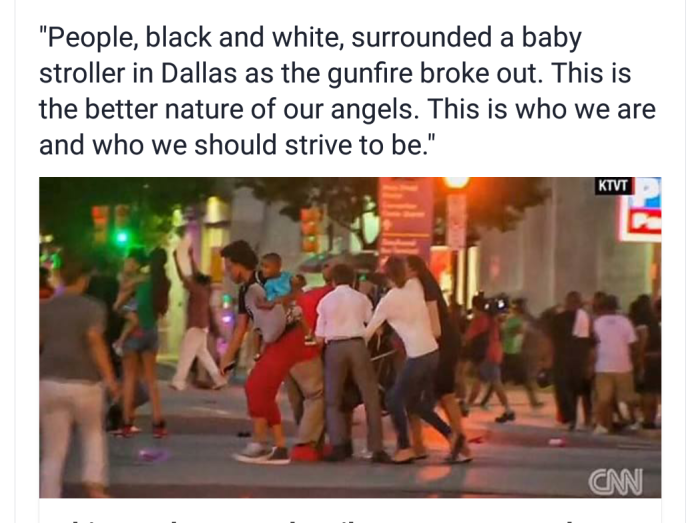 Both a sad and amazing picture of humanity. People risking their own lives to protect a baby from another person trying to kill innocent people.

A good friend of mine just had a beautiful baby boy. And instead of congratulations the first thing I say to him is, “did you see that Dallas stuff? Great time to bring a child into this world huh?!??”  (Can you sense sarcasm over the internet?)

How has our outlook on life become so omnious that the first thing we think about after having a baby is… well this is a shitty time to have a kid.” It’s supposed to be an amazing time. It’s 2016 and I have a two year old. I should be jumping for joy for the advancements in technology (IE: iPads so you can shower without your child trying to climb in, or authors who write books that are less than 10 pages long so bedtime prep isn’t four hours long.)

I just don’t get it anymore though. Police officers when I was a kid were like the raddest people around. You either wanted to either be a cop, a firemen, or an astronaut. Police officers were just, people were good and the bad ones went to jail.  I don’t get how we got here. Did things get this bad this quickly, or have I just been this naive to notice the slow decline of humanity?

I feel like when I was a young lad my parents were worried about a few simple things… don’t eat glue sticks, don’t play in the middle of a busy street, eat your  vegatables… especially your carrots so you don’t go blind and you have to wait at least half an hour after eating do you don’t drown. Now we worry about things a bit more serious… Airline hijackings, shoe bombs, AR15 rifles being used for attacks against innocent people.  What happened to us.  What happened to being against the “bad people?”  Not being against one class of people or one race.

Jon Stewart said something about it being ok to be against corrupt police offices while still being supportive of our policemen and women. They aren’t mutually exclusive. It’s ok to be upset about things going on in the world with out spreading more hate. We have children who watch us amd.learn more from our actions than our words.

I have another friend who posted about wanting to bring her daughter to the inauguration if we had our first female president voted into office (political beliefs aside).  However, she said she doesn’t feel safe doing so. How is that fair to our children?  To anyone?

It’s like we declared martial law without anyone knowing or something. What did I miss that turned our society into a real life Hunger Games? Either I need.to sharpen my bow and arrow skills (can you sharpen a skill you presently don’t have?), or we have got to get our stuff together out here.