Super Bowl commercials do one (maybe two) of the following to the viewers: hype us up, make us laugh, or make us cry.  This year there were a few of the hype and comedic commercials… but it was the attempts to make us cry that seemed to prevail.

The folks at Dove have decided to go with the latter this year by running an ad as part of its #RealStrength campaign, which depicted children of all ages and races calling out for their father.  Essentially, the spot contains only one word the entire time: “dad.”  Whether it was “dad,” “daddy,” or “dada” the commercial shows real dads who are a positive influence on their children.

This commercial brought on all the feels.  Chills, Goosebumps, tears… you name it we felt it!  In doing research for this commercial Dove says that it conducted a survey in which only 13% of the 1,000 fathers surveyed said that fathers are portrayed as care givers for their children.  This commercial is perfect.  It’s a simple and beautiful statement.  Fathers are responsible for more than teaching their children about sports, girls and cars.

Recently, mom and I have been playfully arguing back and forth about Jackson’s first words.  I swear we’ve heard him say “dada” a few times.  Hearing your son call you dad for the first time would make even the Grinch’s heart grow..

Most of the time dads are portrayed in a negative light in the media. I for one am happy to be a dad who prides himself in being largely involved in his son’s life.  I am glad this ad ran during the Super Bowl, not just because of how horrible the other ads were, but because it gives us dads a little air time in a positive light.  Plus, it gave us a good reason to shed a few tears… but only a few, because remember dads are tough… we don’t cry! 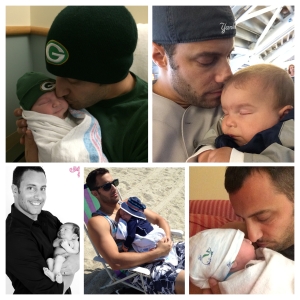 One thought on “Dove’s Dad Commercial Won the Super Bowl”