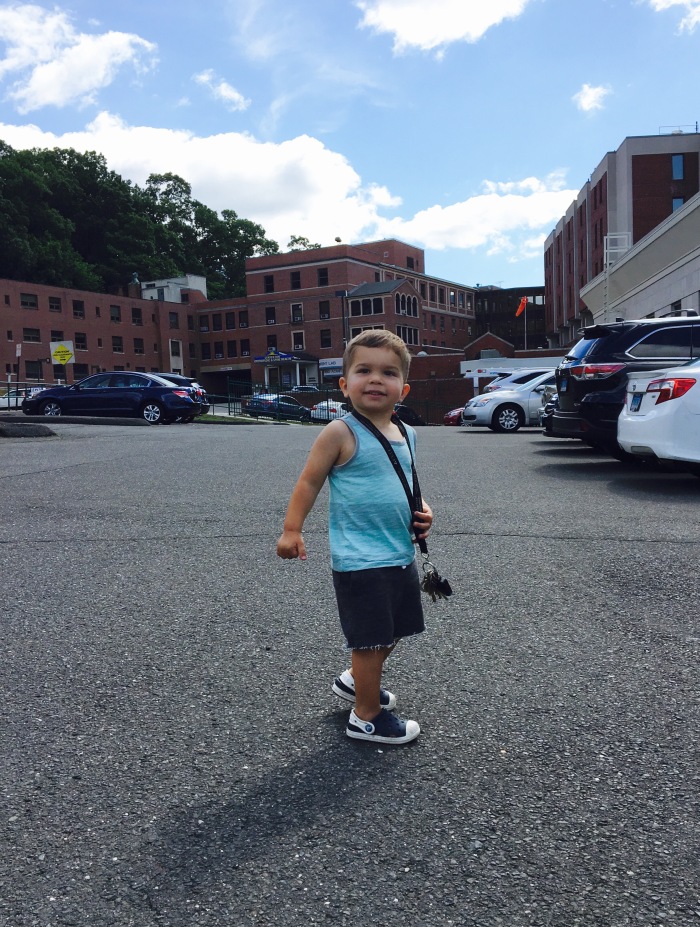 Just a miserable way to start of a beautiful Saturday.  This poor kid had no idea what he was about to go up against.  He was just so cute walking through the parking lot, seeing the ambulances and giving high fives to police officers and security guards.

Needless to say he had no idea he was going to be encountering a needle wielding woman who only wanted him  his blood.  It’s tough watching your kid walk so innocently with a big smile knowing he’s about to get stabbed more times than an inmate in a prison fight. The worst part is trying to keep a calm demeanor, because toddlers are like fortune tellers or gypsies or something, one wrong look and they immediately sense imminent danger and their happy, go-lucky attitude turns into all out panic mode as they flee for the nearest exit.

Luckily we made it to the waiting room, but not with out the saddest looks  from just about every human in the building as we walked down the hall. I’m not even quite sure who the looks were for… Might have been for me knowing what I’m about to endure as well. It was a short distance but the walk felt like a epic journey down that white hallway which was lit by buzzing UV lights.

We got the waiting room and he immediately made himself at home, pulling out an US Weekly and leafing through the pages.  (On a side note why are all hospital magazines decades old? Is it necessary on a day like today for my son to have to read about Jennifer Anisten and Brad Pitt filing for divorce?  I mean get something from this decade at least!)

The moment of truth arrived soon after Jax read about the falling of the Berlin Wall. As we were called in to a small room with two chairs, one which looked appropriately like an “electric chair” Jax began to understand why  we were there.  Sadly for him it was too late to run. I sat in the electric chair and was instructed to “hold him tight and not to let him move…”  I laughed sarcastically and wondered if they understood holding a two year old down is like trying to catch water with a strainer.  Luckily my PMT training came in handy as the basket hold at least kept him at bay until the needle began to jab him.  I literally watched in horror as they jabbed the needle, what seemed like 19 different times, in various directions and still did not find a vein.  I felt as if I were watching a live episode of Game of Thrones.

After what seemed like hours of trying and more needle jabs than Barry Bonds in his prime, poor Jax was covered in tears and snot.  No SpiderMan bandaid was going to solve this problem and, “no nurse he doesn’t want your Lighteming McQueen sticker.” What he wants is to get the hell out of here and never come back.