Baseball continues to play such an important part of my father/son(s) interactions. Especially now that Oliver is more than a sack of potatoes with eyes, and being that he can engage in activities for longer than twelve seconds now it was finally time to take him to his first baseball game.

I’ve written about how growing up baseball was so important to me and how it shaped me as a young man. I’ve discussed how it shaped my relationship with my grandfather (Pop) and now how it’s shaping my relationships with my sons. Then again… it’s America’s Past Time and a father/son rite of passage… so how surprising is it that my first game with Oliver was such a big deal.

No it wasn’t at the Cathedral that is Yankee Stadium we didn’t get to see Derek Jeter’s last home game, but we did get to witness one of baseballs top prospects, Brendan Rodgers, in one of MiLB most amazing parks, Dunkin’ Donuts Park, home of the Hartford Yard Goats. Not to mention they have the dopest logo and mascot in all of sports. Needless to say it was baseball, it was live and it was amazing.

We sat in the right field stands for a night game (which is not recommended for a 15 month old, let alone a four year old). The view was amazing and the stadium dogs, chicken fingers, pretzels, ice-cream, french fries and waters were tasty (by the way: that was just for the kids). We watched the Yard Goats win 11-1. They played as the Los Chivos de Hartford and rocked sick alternate jerseys for the game. Highlights included Brendan Rodgers going 3-4 and Peter Lambert pitching a complete game four-hitter.

Now listen I’m not going to sit here and lie and tell you that bringing two children to a ballpark is easy, or that it isn’t without its difficulties (and choice words muttered under my breath from time to time)… but it is quite amazing to be with both my boys, especially with Oliver for the first time, at a baseball game. 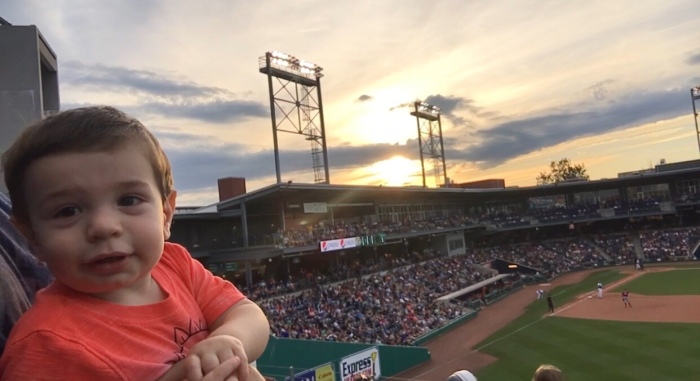 It was great to experience everything as a family, to be with my wife and two boys. But of course being a dad and taking my son to his first game is extra special. I enjoyed every second of exposing Oliver to how the game works… and he enjoyed clapping when I clapped. He smiled and seemed to be enamored by the green grass and beautiful sunset over the first base side seats. He enjoyed the food and the fans, but I’m pretty confident in saying I enjoyed being there with him and his brother more than either of them will ever know (that is until they have sons of their own). Then again if you read this blog often… you already knew that, besides it’s America’s Past time and a father/son rite of passage… and everybody knows that. 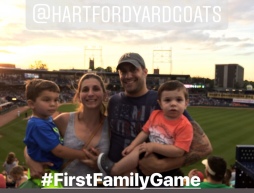 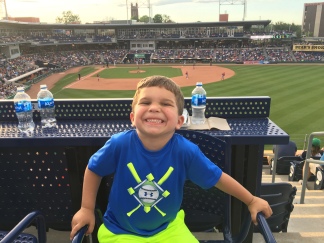