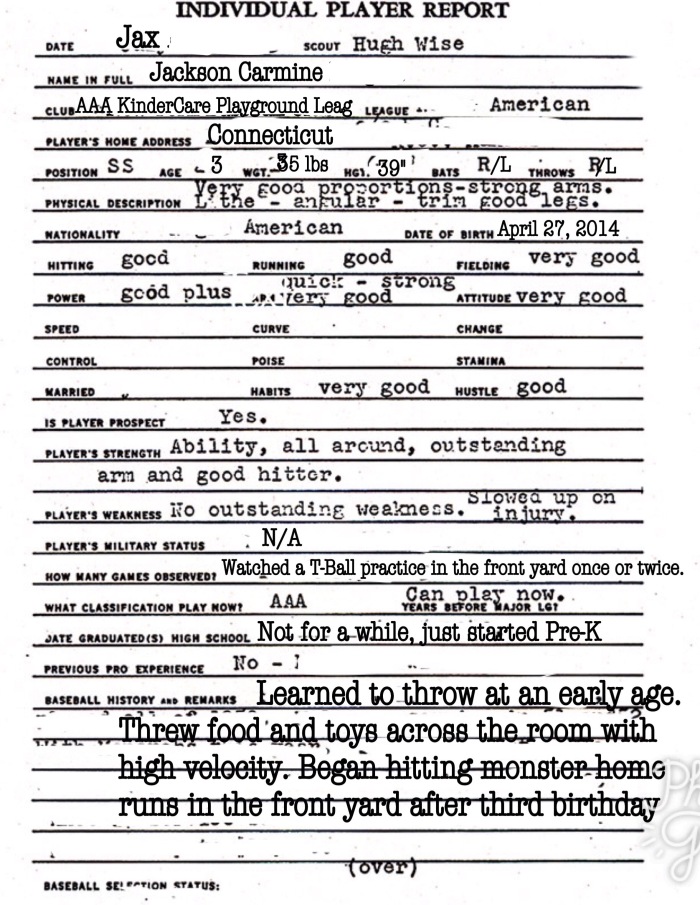 ​Through his first three years Jackson has shown prowess as an athlete, with quick feet, soft hands and an eye for the ball, rumor has it that he hit .435 with 14 home runs and 16 stolen bases in the AAA KinderCare Playground League. A major league scout who requested anonymity furnished Chronicles of a New Dad with the following scouting report of the future major leaguer…

Jackson shows some bat speed, but his swing is stiff. He is a physical specimen in the box (listed at approximately 3 ft tall and -almost 36 pounds) with good balance in his swing. He is stiff, but I it’s noted that he has loosened up a bit lately. His limited pitch recognition is his issue. That will come with more at bats, and with limited plate appearances (maybe three days worth of hitting while not being preoccupied with the dogs barking, the basketball hoop, or neighbors walking but, there is still room to grow). What he is doing is really difficult, being a three year old trying to make the jump from Pre-K to the major leagues, but if anyone is going to do it, it is definitely going to be him.

Defensively, Jackson has choppy footwork. His first step is slow and it often looks like he’s not sure where is going to go. He will get to the routine play, but he is not going to win you a ball game there and potentially could get you beat. He runs with reckless abandon and will run through a brick wall for you (he’s actually done it a few times already).

Once he figures out what arm to throw with on a regular basis, he projects to have a canon. Has been throwing household objects around the kitchen and family room for a while now and has even broken a few toys with his laser like throws.