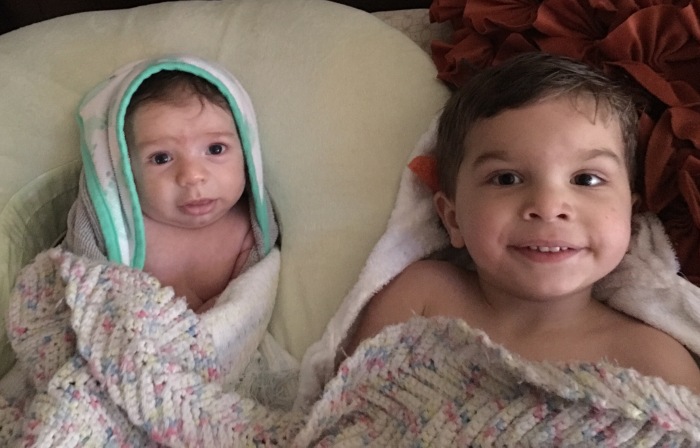 National Sibling day? I mean I guess it’s better than national footling hotdog day or national pineapple pizza day. For the past three years Jax celebrated this fake holiday with Buster and Max… however he now has to share this holiday with a miniature version of himself. A human sibling is a blessing and a curse… (I know I have two of them).
It’s only been two months but I thought I’d celebrate this Siblings Day by highlighting the top five interactions between Jackson and Oliver’s short life together so far.

5. Jackson decides to Baby Ollie by pushing him “gently” in his swing to help Rick him to sleep. This was a bad idea from the start mainly because Oliver was already sleeping and literally was snoozing hard. Not the dogs barking, doorbell ringing nor a blaring TV could wake him. It was one of the very few times we were able to get this kid to sleep with little to no fuss. That is until Jackson decided to push him into orbit. The swing hit its max flight capacity so quickly that it nearly jolted Oliver out the front window. Needless to say Oliver was awake for the next 22 straight hours.

4. Early on in our sibling story Jackson, the eternal patron saint of feeding the starving, shoves a few goldfish down the gullet of a -“as he describes it “very hungry” six day old Oliver prompting and Immediate finger sweep of his esophagus. This was one of those times where you are very thankful for first aid/CPR training.

3. That time Jax felt the need to help a crying Baby Ollie by jamming his pacifier down his throat. I mean I get it. Those high pitches screams just get to be a little too much sometimes. And if he won’t keep the pacifier in his mouth then someone has to do it for him. Insert big brother…insert pacifier… forcefully.

2. Close your eyes and picture one of those Strongman competitions where the Hercules looking chaps pick up those gigantic boulders and then place them ohh so carefully on top of a stone pillar. Now take away the pillar and replace the boulder with a newborn. That’s close enough to what it was like watching Jax decide he didn’t want to hold Oliver any longer. It was done with love and care… just a nonchalant shrug of the shoulders and a quick mumble of something that sounded like, “No more hold Baby Ollie.” That and then letting him roll slowly off his lap.

1. It’s about time Little Baby Ollie made an appearance on the countdown. And what an appearance it was. Oliver coming in hot at #1 with a move that you just can’t come back from. The ultimate power move. It’s like talking cup says in Beauty and the Beast… Tale as old as time. Once your toes hit the water… bath or shower the seal is broken, and the floodgates are open. Oliver just turned on the fire hose and caught Jax with a powerful stream of pee-pee. It could have happened to anyone and I’m sure it has, but in our story it’s nice to see the underdog catch a break and win one for once.

And there you have it. Jackson dominating the most of the list, just as he older brother should. But Oliver coming in with a savage brother move lands him at #1 on the Sibling’s Day Top 5 Hilarious Interaction List.

Let’s just hope they are always this peaceful

All four siblings calm… for the first and last time: