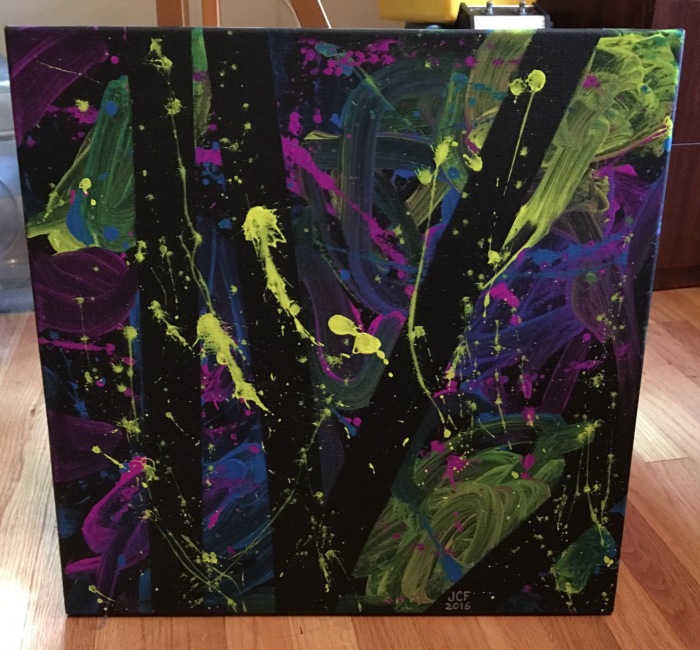 I’ve heard that #SaturdaysAreForTheBoys, but last week it was a (Tuesday) that was about the boys. Or at least it was supposed to be. A nice quiet dinner with my dad and brother. No Jackson. Just the older boys. A night to talk shop and catch up on things.

I love my son more than life itself, but last night wasn’t about him and I think that’s ok. Of course he was going to come up and I’d show pictures and videos of him and we would laugh and talk about how cute and funny he is. We would laugh and smile, but get back to adult guy things like sports and finances and our jobs.

That was until I made a huge error in judgement. I brought Uncle Vinny a present from his godson. Jax has been painting for a while now, however only a few JCF originals were created and as of now there are currently none in circulation (only in private collections). Literally… With in seconds two different woman were at the table asking about the painting. One made reference to blue and purple being her favorite colors and the other how amazing it would look in her living room. I felt like I was at an art auction. They got up to a final offer of $350 cash on the spot.

Insane… But all in all, owning a JCF original meant more to Uncle Vinny than some cash.

(Guaranteed that picture is hanging in that woman’s living room by now). 💰💵💵

Check out Jackson’s other works of art below:

One thought on “Mini Monet Makes Me Money”