Even before Jax was born he had things being purchased for him by the truck load.  Some things were bought in bulk, like diaper and onesies with cute and sarcastic pop culture references, and some were bought more carefully… case in point: Taggie (sometimes goes by the alias: Blanky or Lovey).  Some people swear by them, some people seem to think they do irrevocable damage to the psyche of a child as they grow older.  To some people it seems so crazy that a baby so young could link an inanimate object to a feeling of safety and security… but to me… anything that is good enough for The Peanuts crew is good enough for my kid.  Thanks Linus, you were right… Happiness can be found in a Security Blanket.

I understand he’s getting older and I completely understand the feeling that you know what is best for my kid.  I get it… you think he’s getting too old to be toting a colorful blanket around as we do errands, the thing is…   He loves it… it makes him feel comfortable and safe… and guess what… I don’t care what you think.

My son’s taggie is something that is extremely valuable to this family.  It is something that I always want him to have when he needs.  God knows I want to have it around whenever I need it… like nap time at a friend’s house, for long car rides and especially for a visit to the doctor.  It means more than just safety and comfort to him, I think to mom and dad it is a reminder of how small and innocent he still is.  No matter how much he insists on doing on his own these days, he still wants to hold taggie close to him at night. At some point (when we are both ready) taggie will get tucked away in a safe place for him to give to his children or to keep as a memory… but today is not that day.

I was walking into daycare the other day with my son when the person holding the door for me noticed Jackson holding Taggie tightly. She smiled at me and turned to Jax and said out, “You don’t need that, do you? You’re a big boy.”

I try really hard to have a good poker face. To be honest, Im not sure after hearing that statement, if I smiled calmly and nodded or if I scowled and sighed loudly. I do know however, that my brain conjured up about fifteen things I wanted to say in response (luckily none of them came out).  Instead of blurting all of those things to this person, who suddenly seemed to be the expert on parenting my son, I think I said something like, “Yes, he needs it. And so do I.”

I hope Jax grows up and holds Taggie for as long as he needs it.  I still remember taking my “pillow” with me everywhere I went when I was a kid.  I might have even taken it to college with me.  At that point it was less about security and more about comfort (although I guess those two are not mutually exclusive anyway).  I kept that pillow until recently, when I found it in my closet sitting nicely in a basket under some old sweaters. It must have been there for since I moved into the house 15 or so years ago.  It was then that I realized I had no need for it anymore other than a fond memory.  And at some point the same will go for my son… just not yet, and I am OK with that. 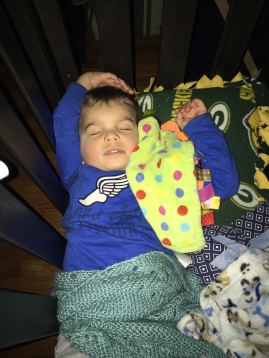 Bottom line, I have no problem w/ my son loving his taggie. If for some reason you do… MIND YOUR OWN BUSINESS.