Another Halloween… and another day of shoving my poor son (who doesn’t even like wearing normal clothes) in a costume as soft as sandpaper. Why do parents do this to their children? The last thing Jax wants to do before getting dropped off at day care is to put a 14 pound puffy cotton ball on his head.

Getting this kid ready in the morning takes a particular set of skills. Skills needed to have been acquired over a very long career of parenting. Skills that I apparently don’t have which makes mornings a nightmare for people like me (Taken reference). Yet today we decided to add 37 more steps to our morning routine by sending him to school dressed up as Olaf. Poor, poor, poor kid. He took it like a champ though… after ripping the Velcro open a few time and throwing his Olaf head at Buster.

Our first Halloween night where jax was old enough to “get it” was fun. The neighborhood fell under Little Olaf’s spell as they literally dumped candy into his bucket. He said a lot of please and thank yous and even ran into a little Elsa on the side walk and stopped for a quick hug! 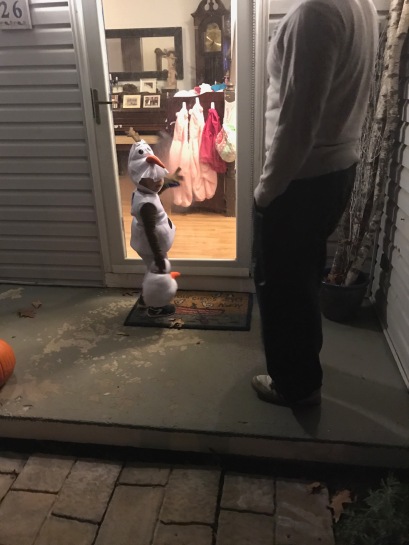 Jax then had to begin handing out candy to the older kids before we realized the dogs ate two of the three bags of candy we bought. The final four kids come to the door. Stef says sorry we only have three pieces left and Jax carefully watches his last three snickers bars fall into open pillow cases. The last kid drops his head and is sad. Mind you there was a GIANT SIZE candy bar left of the counter… Stef literally sent a child away because she didn’t want to give up her last KitKat!!!

The night ended when I let the dogs out the front door because a huge crowd rolled up in a trailer hitched to a pickup. No more candy, lights out yet they still kept coming… the dogs took care of that. The dogs literally scared the poop out of hose high schoolers as kids were tripping over each other to get away.