Over the course of almost three years Buster and Max have been on the short end of the stick for a lot of famous incidents. There’s the Meatball Massacre, the Christmas Catastrophe and the time Jax let Buster and Max outside in a driving snow storm without us knowing… poor dogs turned into real life Four legged Olafs.

But the thing is these guys were here long before Jackson… and honestly I’ve cleaned more Buster and Max pee and poop then I’ve cleaned up from Jackson. These guys are a huge part of Jackson’s life and from day one, they’ve been extremely protective of him.

Meanwhile, Jackson has tried to ride Buster like he was a camel and has attempted many WWF finishing moves on poor Max. Both dogs have nubby tails, yet Jackson is still able to yank on them and the fact that Buster’s ears are still attached to his head is a miracle.

The thing is though, Jackson has learned how to be patient, caring and at times remorseful through his relationship with his “brothers”. It’s been, at times stressful, but for the most part it’s been so very rewarding to watch my son and two dogs interact and enjoy each other’s company.

They say a dog is mans best friend… but I’d venture to say that once a child comes along… a dog is a boy’s best friend. (Especially this little boy and “Di-Di-Dah and Dah”). 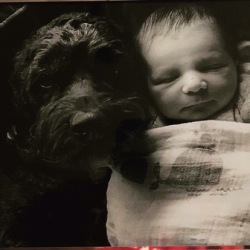 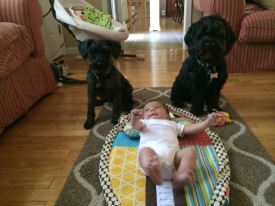 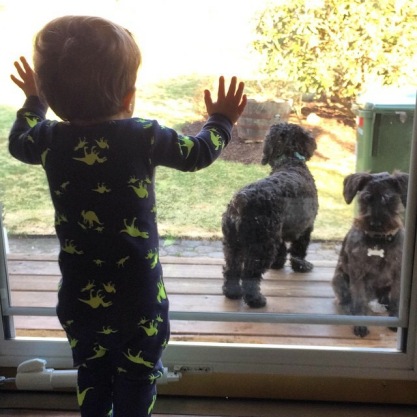 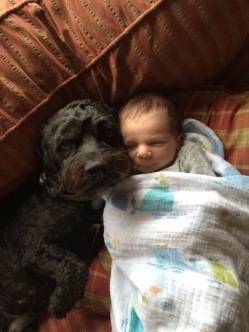 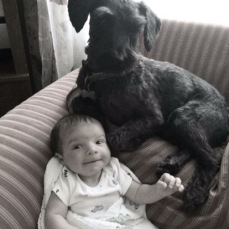