The time has finally come. That time that every parent fears: their child’s school performance/play. I’ve seen so many of them as a teacher and principal and they, from that side are amazing. An opportunity to see 300 students whom you work with each day, who’ve you’ve seen grow abs improve each day, put it all together and show off their growth.

Growth mindset, that’s what it’s all about as an educator. But as a parent. We want to see the end product. We want to see an end product from start to finish and then get the heck out of there. I don’t want to watch everyone else’s kids spin around in circles, or cry on stage. It’s uncomfortable for everyone. You feel bad for the teachers who have to don the kindergarten Three Little Pigs costume and be the only ones up on the stage to know the lyrics and Dane moves. There’s the parents who are standing just off to the side yelling stage directions to their child who they feel should be acting on the next Nick Jr. Hit show and you as the parent who’s just happy your kid hasn’t run off stage and peed in the bushes.

Then there is the fact that you’ve worked a full day and have nothing in your stomach but a granola bar and three cups of coffee. All you want is every performance to last just long enough to snap a few pictures to stick on Instagram and time it so perfectly that it looks like your child knew every part of the play. Then you can set it as your profile picture on Facebook so it looks like you have the next Robert Deniro on your hands. The worst part though… the transition time in between class performances. Class A runs around the stage, the poor teachers looking like Rocky chasing that chicken. They might as well be herding cats. Poor Class B is having kids who are screaming and crying dragged onto stage so their parents can clap and wave. It’s painful to watch as 17 hours pass in between songs when all the audience wants is a smooths and quick transition like when Netflix only makes you only wait five seconds to watch the next episode. No time wasted, no one hurt, one class off… the next one on… everyone’s happy.

However, there’s always that one child. The show-stealer, the ray of light, the savior. You know right away that they are meant to be on that stage… to bring entertainment to the masses. To bring joy and happiness to the masses as soon he/she takes the stage. It usually happens after a lull in the show. Maybe a few classes performed a nursery rhyme or too… maybe they just stood still and smiled. But then it happens… a child comes from the clouds and struts his stuff right to center stage. You can tell from that twinkle in their eyes that something special is about to happen. Then you hear the intro. The beat drops like your at an old school Notorious BIG concert. It’s the Lion King… you instantaneously know that child is going to put on a show like no other. “I just can’t wait to be king…” the perfect metaphor for what is about to go down. The king of the Pre-School Play is about to dominate the make shift stage in the center of the parking lot.

… and that’s just what happens. It just so happens that the new king of the stage was my little boy. Jackson “Fred Astaire” Fragola. It started off slowly, and I could hear the crowd starting to chat amongst themselves. Then it happened, Jax sensing the crowd was in need of something to cheer for, stepped forward and put on a show for the ages.

​​
The slow clap to get the crowd going, followed by the slow spin into the toe-tap (trip over his own feet) was stunning. The crowd began to buzz and you could see the adrenaline coursing through our new star’s veins. Our savior was here. The clouds parted. The bass seemed to get louder and the energy in the crowd was equal to a stadium full of tween girls at a Justin Bieber concert.

A few more moves brought ohhhs and ahhhs… and then it happened. The half turn, the look-back smile… and the then… THE RUMP SHAKER! 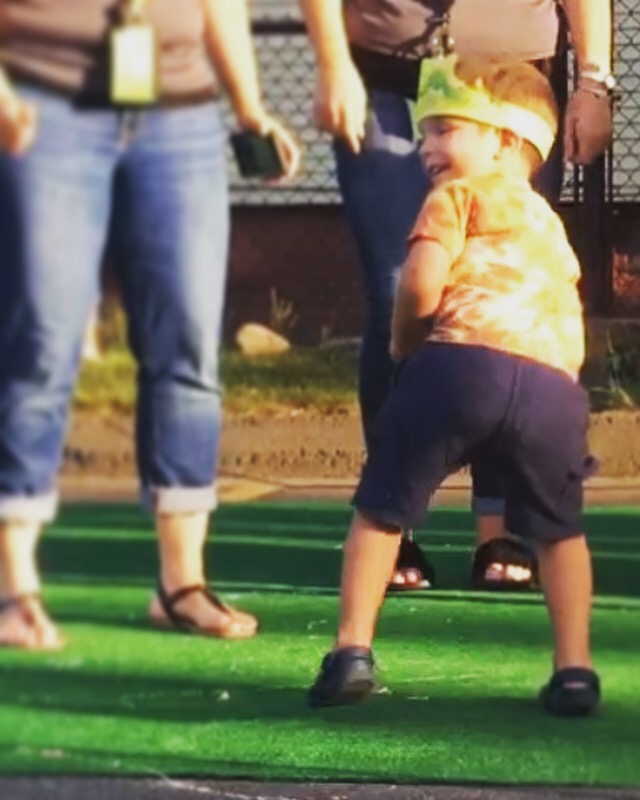 It was over, right then and there. He had officially taken over. The crowd lost their collective minds. It was pandemonium…

…And then… just as quickly as it started, it all came to an end. With Jazz Hands and a smile… it was at that moment a true star was born.