“There’s no way I’m reading this book.” I think I tried at least half a dozen times before finally giving up and looking for an Internet summary for a young-adult lit class in college. You see I was a “track star” and didn’t have the time for a story about witches and trolls or whatever these books were all about. It wasn’t until months later, during a dull summer afternoon I gave the Boy Wizard and his Lightening Bolt Scar another shot.

Fifteen-ish years… seven books, eight movies, three trips to the Harry Potter theme park in Orlando and an sleeve of Harry Potter tattoos later, I’m on the verge of attending a midnight release of another Harry Potter book. 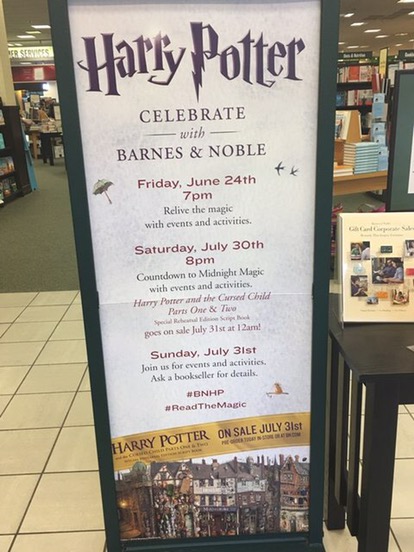 I am 37 years old and just became an elementary school principal and I now have a son who turned three this past spring and another who is five months old. Like most of us who are now in our 30s, we grew up alongside the amazing world of Harry Potter, and the impact it has made on our life is hard to quantify. For my generation, (although I joined the wizarding world a little later than most of my peers), Harry Potter is a close friend and trusted companion. We came of age with the the young boy who found who he really was after leaving the “cupboard under the stairs” and we have now taken him into adulthood with us. I can’t imagine a childhood without him, and I’m so glad he’s stuck around as I’ve grown older.

The books came to me at a time when reading was a chore… an assignment or research needed for a paper. I was in college and hadn’t been really interested in a book since The Catcher in the Rye or A Separate Peace which I read early on in high school. I was interested in my track practice schedule and where my next track meet was. I didn’t have time for “reading for fun.” I was never really a fan of the fantasy genre. I never really got into Star Wars and at the time had only read one book in the Chronicles of Narnia series (The Lion, Witch and Wardrobe, of course for a class assignment).

All that until I met a young wizard when I was in my early twenties. I was immediately… pardon the pun… enchanted by J.K. Rowling’s… pardon the pun again… magical way of spinning a tale. Harry, Ron and Hermione felt like old friends and Hogwarts felt like home. I had never interacted with text the way I did with these books. I had heard of “page-turners” before, but never held one myself. That was until that dull summer day all those years ago.

I tore through the first book in a few weeks, the second in about the same. Then came the Prisoner of Azkaban, my favorite of the series, which I devoured in three days on a trip to Boston. Book four, the longest of the series, took me about a week and was the first book I reread multiple times. The Order of the Phoenix was the first book I bought the day it was released and got through it in a few days. Then came book six, The Half Blood Prince. My first midnight release party. That night I asked Stephanie to marry me, gave her a ring and we sprinted to a small Indy bookstore on the Wildwood boardwalk to wait in line with hundreds of other people. I celebrated my engagement by reading in the hotel lobby until five in the morning and had the book finished on the beach the next day. The final book was an incredibly sad, yet even more exciting day for me. The last time I’d travel to Hogwarts with my friends, but also finally a chance to see our story to the finish line. I picked my preordered copy up at 8:00am and read 36 chapters and one epilogue (759 pages) in 17 hours. I stopped to eat and shower (I read during bathroom breaks too).

Luckily, the Potter fandom has created a life-line for the stories years after the books and movies came to an end. The stories’ centralized themes of friendship, love and leadership helped me be more self-reflective and even inspired others to create charities like the Harry Potter Alliance and Hogwarts’ Running Club. A recent study led by top professors across the world states that “people who grew up reading Harry Potter are more politically engaged and develop keener social perception and increased empathy.”

It’s been years since I picked up a new Potter book, but my time in the Wizarding World has still been busy. From Mugglenet.com and MuggleCast, to Pottermore online, movies, plays… and now as an educator and father introducing a new generation to my “old friends” and Professor Dumbledore’s wise words. My sons’ newborn photos (above) were done with a Harry Potter theme, (I’m sure he will love me sharing them when he’s in his teens). That’s what this series is all about… learning to love reading, whether it’s for the first time or like me learning to love reading again later in life.

I’m excited to bring my sons to Hogwarts for the first time and introduce them to my old friends. I’m interested to see if they’ll be sorted into Slytherin like their father… although based on Jackson’s adventurous, brave and quite daring side… I have a feeling he might be a Gryffindor, Oliver… Slytherin, (before the sorting hat even touches his head)… just like that Boy Wizard with the Lightening Bolt Scar I’m sure they’ll be in awe of the wizarding world. No matter the house they’re sorted into, or what it takes for my boys to become interested in the series, I think we’ll all be awaiting our Hogwarts letters together.

Here are some other Harry Potter related blogs I’ve written:

5 thoughts on “Visiting  with an Old Friend: Harry Potter”